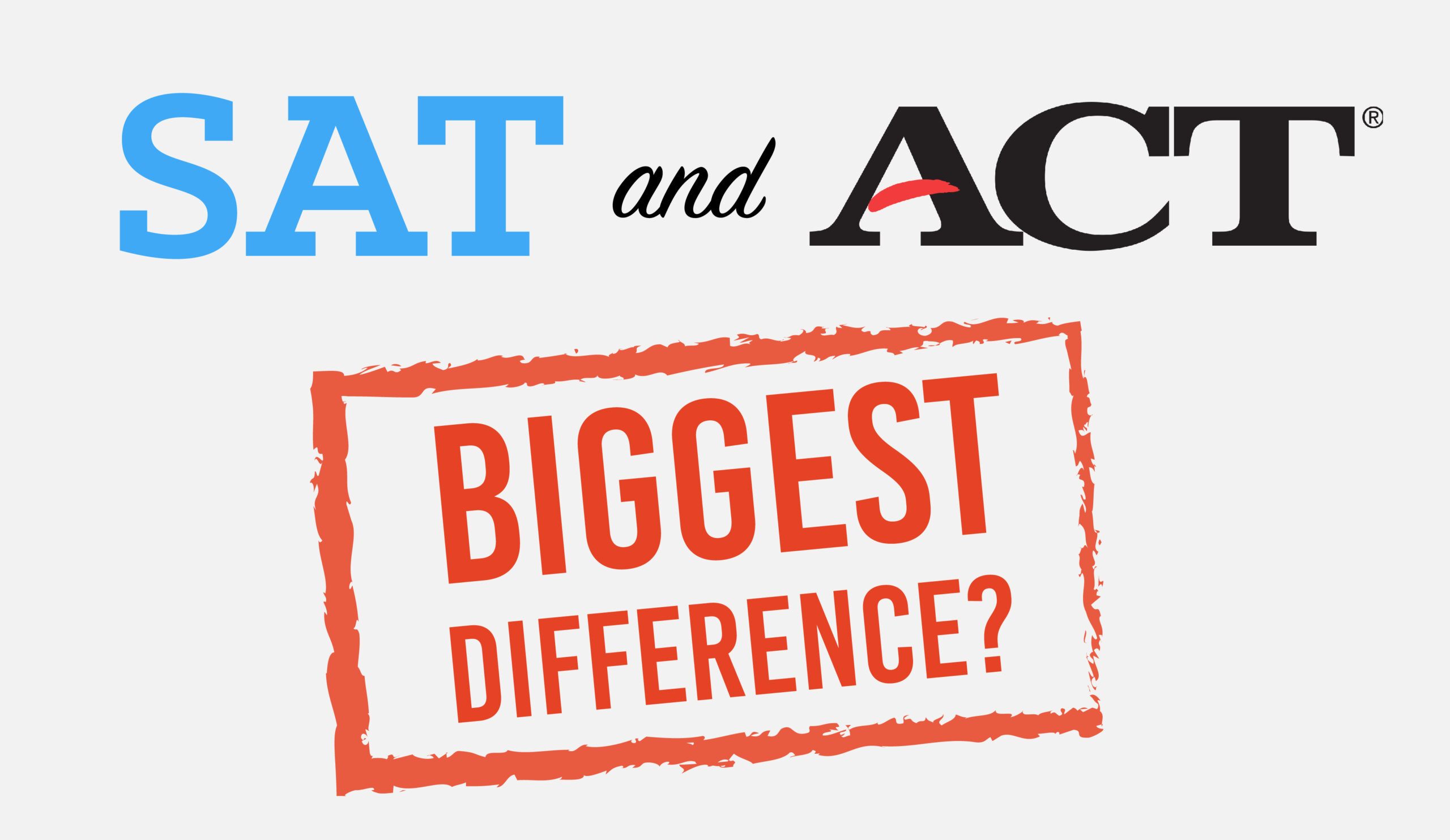 “You need to take the SAT if you’re applying to the Ivies.”

“If you’re bad at Science you shouldn’t take the ACT.”

These are just some of the rumors that have been swirling around our culture about test prep for the past decade. While many of these used to be true, In 2019, most are a bit dated.

Ever since the SAT was redesigned in 2016, the two tests are more similar than ever.

Both the SAT and ACT…

…have no guessing penalty.

…have an optional essay.

…are weighed equally by all 4-year colleges and universities in the country.

However, there is still one big difference between the two tests.

THE ACT HAS TIGHTER TIMING THAN THE SAT

By far the most significant difference between the two tests is that the ACT moves at a much faster pace than the SAT. Compare for example the Reading sections of each test.

On the SAT, students have 65 minutes to answer 52 questions. That’s 1 minute and 15 seconds per question.

But on the ACT, students have 35 minutes to answer 40 questions. That leaves them only 53 seconds per question.

For students who tend to work more slowly, the ACT could present a greater challenge. If they’re not able to answer every question on a section, their score will expectedly be lower.

While pacing can be a challenge, it can be improved. Many students come to us struggling to finish sections in time. Over the course of their prep, though, they become more efficient and are able to push themselves faster.

However, if a student comes to us who is seriously struggling to finish the sections of the SAT in the given time, I wouldn’t recommend they take the ACT.

While pacing is the biggest difference between the two tests, there are some other, smaller differences you might want to consider as well.

LESS SIGNIFICANT DIFFERENCES BETWEEN THE SAT AND ACT

3. ACT allows the use of a calculator on every Math question. The SAT doesn’t.

4. ACT has a Science section. Although, it doesn’t test a lot of scientific concepts. It should really be called the logic and reasoning section.

WHICH TEST SHOULD YOUR STUDENT TAKE?

Some students will do better on the ACT; some will have an advantage on the SAT.

Frankly, some students will perform roughly the same on both tests.

The only way to be sure of this is by taking ACT diagnostic test to see if they do have a preference for one test or the other.

Once you have an ACT baseline, you can compare it to your students’ PSAT diagnostic using the following table.

Need an ACT diagnostic? We provide them and grade them free of charge to help you determine which test might be a better fit for your son or daughter.

Just send an email to info@criticalpointprep.com and we’ll be more than happy to help!

I can’t say enough terrific things about Critical Point Test Prep! They helped my daughter with valuable test taking skills and time management. Her SAT test scores improved after working with them. They are professional and timely. The tutors are friendly and approachable. I will be using them again for my other student.

The highest rated SAT tutoring service on the Main Line

Verified
Nick Scoville at Critical Point did a fantastic job preparing my son for the SAT. My son’s content knowledge, test taking skills, and confidence increased consistently throughout the program. I highly recommend you give owner Andre Kiss a call. When he described the program to me, I knew it was the best place for my son. Money well spent.
Lori Marx
Verified
Great experience with Critical Point Test Prep! Jason Getchell was an excellent tutor for my daughter's ACT. He has a wonderful rapport with students and provides outstanding guidance.
Merrilee Johnstone
Verified
I had a great experience! The practice tests and one-on-one tutoring significantly improved my test scores. My tutor Jason was incredibly helpful and answered all my questions and gave me tons of helpful tips!
Katie Johnstone
Verified
I can't thank all the qualified people at Critical Point Test Prep enough. The techniques and strategies taught were extremely helpful. My son was able to score 200 points higher, which gave him the opportunity to apply to many more colleges. They really do want their students to succeed.
Anne Storz
Verified
I have twins at Radnor high school applying to college this year. They had tried another local test prep service over the summer before their junior year which frankly was expensive and not helpful at all. Fortunately a friend told us about their experience with Critical Point and we tried them out. Both girls had a great experience with their tutor, raising their ACT score and, more importantly, learning much better study habits. Their tutor had a great attitude and adjusted his style to each girl addressing their specific needs. I highly recommend critical point test prep. Especially in this time of corona where everything is so uncertain, you need a strong calming presence for the testing portion!
Ainlay Dixon
Verified
Andre helped me a lot and I was able to improve my score by almost 200 points! Highly recommend for anyone who is trying to improve apon a previous SAT or PSAT score.
Ben Storz
Verified
Critical Point is absolutely FANTASTIC! This is not just a "tutoring center". They have a very sophisticated process to provide one on one guidance and feedback specific to your student. I was so impressed to see the metrics they use to determine areas that need improvement. Then they provide additional homework and coaching. My student was a terrible test taker, and they gave her the confidence and skills to ace her SAT the very first time. I HIGHLY recommend them!!
Lisa Breck
Verified
I was tutored by this amazing team and they really helped me drastically improve my SAT score! I would recommend Critical Point Test Prep to anyone! All of the tutors are extremely nice and very helpful! 11/10 would recommend!
Payton Breck
Verified
Fantastic tutoring center! They push their students to do better, and kept me on track during quarantine. I would not be where I'm at if it wasn't for Critical Point Test Prep! I would definitely recommend to any students interested in increasing their scores!
Navi Singh
Verified
Andre does a great job of keeping the student focused on what areas you are lacking in, and helps you identify a genre for all your flaws to practice them. Additionally, his way of simplifying things with extremely simple examples of complicated questions helps the student really focus on the process of solving the problem. I did Andre for a year as a student and my SAT improved over 100 points between just my PSAT and my first SAT.
Charlie Bernicker